When we first started working on the renewed interface in October 2014, we hardly knew what to expect. The replacing dashboard (in desperate need of replacement) had to be up and running in a year and a half.

It is now nearly one and a half years later and we are grasping the magnitude of this project. We are already well on the way, with a functioning preview version and active users. Yet, there is still a long way to go. Time for a retrospective and a glance into the future!

The Flash dashboard gets its name from the technical format (Adobe Flash). In 2008 the development of the new dashboard started and technical elements develop swiftly. Everything used to revolve around Flash: video in browsers, interactive videos and basically every computer. Smartphones were scarce and tablets out of the picture.

Our first steps towards a new interface for the Online Video Platform started with research. We looked at who is using our system, how often they use it and how well they get on with it. In other words, we looked at who we are designing the new OVP for. Our experience and client base told us we have users with many different positions and roles. The interface needed to please both die-hard OVP users and not-so-heavy users.

It's all about the context

The redesign of the interface, which we call OVP6, started with the distinction between different tasks for the user. The OVP has so many functionalities, it needed a clear navigational structure. Instead of basing it around objects, we created it around the user. We asked ourselves the question what the user would want. So it is all about putting the platform into context:

In most cases the user has a mission within the OVP. The user only wants to fulfill that particular task and nothing else.

For example, a user wants to know what the user statistics are for last week. So, they navigate to the tab ‘Analytics’. Here, users can find all the tools and data they need. It helps when this interface is clear and clean. So no other functionalities: less is more.

You're not a wizard, Billy

There is a clear distinction between ‘pro’ interfaces and ‘consumer’ interfaces. Take Apple Cut Final Cut Pro and compare this to Apple iMovie. Both come from the same company, but the first one is clearly meant for professionals or prosumers. While the latter focuses on the consumer who merely wants to edit a quick movie.

In the land of OVPs, you can also distinguish pro and consumer platforms. For the consumer, there are Vimeo and YouTube. Professionals have other platforms. Our experience teaches us that clients mainly use the Blue Billywig Online Video Platform for professional objectives. Which means: uploading videos, adapting them, integrating the OVP in current systems, creating extensive interactive videos and gathering more in-depth data.

To create a good workflow, we have chosen screens that give an overview. This helps the user focus and deal with questions later. We stay clear from a wizard structure. Instead, we use a clear and clean overview in each and every screen.

The future of the OVP

OVP6 has been live from 2016 onward and below we offer you a little sneak peek. However, it is better when you experience it live. So, make sure you log into our Online Video Platform.

Also, as of 2019 we have launched OVP7, with plenty of new features and big improvements on our analytics. 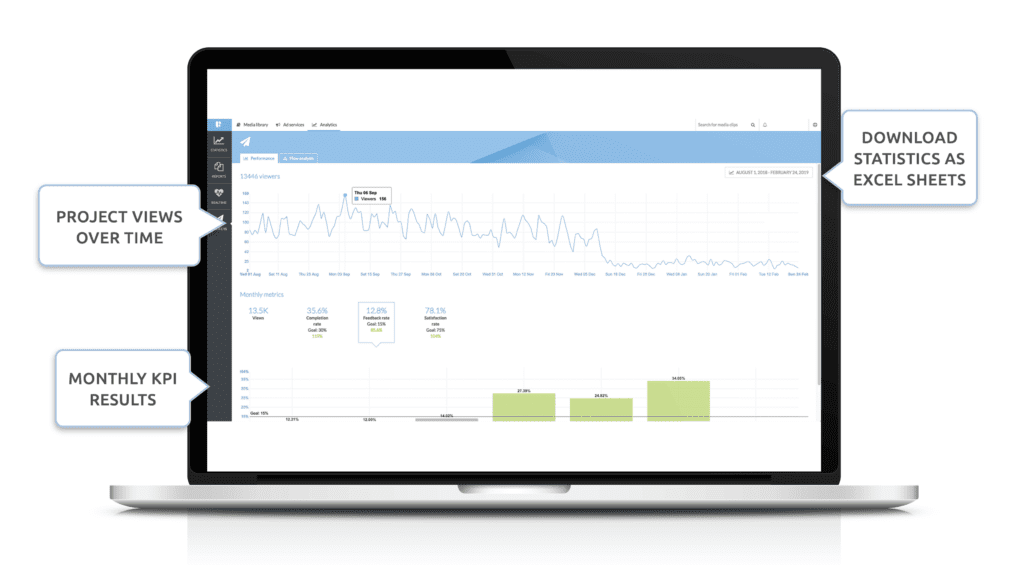 Get ready for the launch: OVP7

Get ready for the launch: OVP7

By Blue BillywigMarch 13, 2019online video platform, platform update, user interface
Creating an interactive video can be quite the project; setting up goals and KPIs, drawing out the various steps and paths in a flowchart and measuring these steps right down to the click.

By Blue BillywigFebruary 25, 2019guidelines, platform update, web guidelines
A small change with a big impact: we've improved the contrast of the subtitles in the Blue Billywig Player.

Request a free demo today to find out what the online video platform can do for you and your business objectives.