5 key OTT trends to look out for

The pace of change in the OTT industry over the past two years has been nothing short of extraordinary, but while OTT’s continuing growth can be considered a given, consumer behaviors are likely to change, forcing the industry to go along with them. In this article we’ll dive into the current OTT trends and the opportunities and impact this will have for your business.

OTT, meaning over-the-top, can be best described as the delivery of video content through the internet, bypassing traditional controllers such as cable and satellite television platforms. The most obvious and successful examples of this are Netflix and YouTube.

The rise of OTT

Before we dive into the OTT trends, let’s take a look at the growth we’ve seen in the past two years. OTT consumption continued its upward trajectory throughout 2021, as people all over the globe partook in the golden age of video content. First there was a huge 75% bump in consumption beginning in early 2020. Just when one would assume growth would level out, both the number of households that subscribe to a streaming service and the number of hours spent consuming content leapt by 20%.

Americans in particular had an insatiable appetite for streaming as viewers in the USA alone streamed nearly 15 millions years’ worth of content in 2021. In Western Europe, it’s expected that 45% of the population will be OTT users by 2024, while in APAC, OTT revenue is expected to grow by 90% to $54bn by 2026.

#1: The Rise of Niche Platforms and Owned Channels for Smaller Publishers

While services like RTL’s Videoland in The Netherlands, Now TV in the UK and Viaplay in the Nordics act as more local versions of Amazon and Netflix, there are numerous niche platforms whose highly specialized content is winning them fans and loyal viewers. Services such as Mubi (classic cinema), Crunchyroll (anime), Shudder (horror) and Yaddo (documentaries) have all had significant success while sticking to their chosen niche.

Going smaller still, there are a range of publishers and other companies now launching their own OTT services rather than, or in combination with, publishing on a renowned platform. We’re seeing food vloggers, religious channels, yoga studios, gyms and sports clubs all launching their own services. As a business, big or small, you now have the opportunity to use models that will benefit you most, keeping your loyal followers engaged within your own walled environment.

Tech accessibility is driving this OTT renaissance. Once upon a time, launching a broadcast channel required an unspeakable level of investment, but not anymore. An ambitious publisher today can launch a streaming service for as little as €5,000.

During the pandemic consumers across the globe splurged on subscription services, but the party couldn’t last forever. Deloitte Global predicts that streaming services will see 150 million service cancellations in 2022. That’s a global churn rate of 30% .

Today, consumers are more willing to watch ads in exchange for smaller monthly outlays, which means AVOD is likely to grow substantially in 2022 and beyond, and take a chunk of ad revenue from linear TV. GroupM for example predicts that CTV budgets will double by 2026. 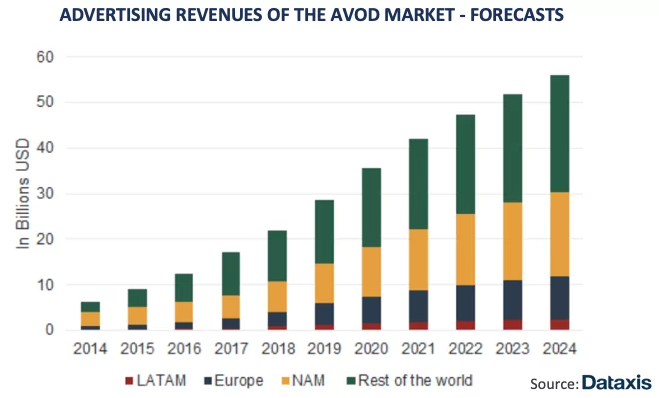 Transactional video on demand or TVOD is making an impressive showing. The TVOD model lets viewers purchase or rent TV shows -- by episode or season -- as well as movies. This model is market tested, as consumers have been sampling shows via Amazon Prime subscriptions for many years. Revenue will reach US $10,423m in 2022, mostly in the US.

Freemium is another model gaining traction, which offers viewers a basic level of service at no cost. Services like the Roku Channel and Peacock allow viewers to watch chosen content, such as popular old movies, TV shows that are no longer in production, and a small peek at some original content.

Subscription fatigue is generally viewed as good for consumers, but it's also opening up opportunities for smaller or niche publishers. For consumers, it will force the non-free streaming services to expand their content catalogs and adapt advertising models, making content more accessible. For smaller or niche publishers, who might have a difficult time attracting a large number of subscribers and therefore surviving on a subscription model, this opens up new monetisation opportunities.

#3: Meanwhile the Battle for Market Share Rages On Among Giants

The real battle, according to Adweek, is for third place. With three streaming services in its portfolio -- Disney+, Hulu and ESPN+ -- Disney had hoped to catch up to Netflix. For a while it looked like Disney+ just may do that, gaining 118.1 million subscribers in its short life. More recently, however, its growth has cooled, and missed its Wall Street expectations.

Streaming services and video platforms were revolutionary in that they allowed consumers to watch their favorite shows on their computers and mobile devices whenever and wherever they wanted. But across the world, smart TV sales are booming (by 2026, half the world’s population will own one). Why watch a show on a 13-inch laptop screen when you can experience it on your 72 inch television?

Improvements in the smart TV UX has more people using them to watch TV -- and signing up for services like Apple TV+, which, by the way, now has 40 million global accounts and 20 million paying subscribers. As this trend continues, more opportunities will arise for business owners to compete and also reach their audiences with highly niche content on the traditional television screens.

If you’re a telco, how do you react and stay relevant in the age of streaming media? Bundling in OTT subscriptions, like Netflix, HBO or Disney+, as well as music streaming services like Spotify has proven a shrewd move to prevent this business model from going the way of the old video rental store. For example, AT&T customers can avail of plans where they can stream HBO Max and T-Mobile’s Simple Choice customers can binge on Netflix, Amazon and Hulu, while Verizon customers can gain access to Disney+, Hulu and ESPN+.

By next year, such bundles are expected to account for up to 50% of online viewing minutes.

While the OTT market has enjoyed stellar growth, it’s far from mature. The AVOD market has a lot of challenges on its hands with targeting and privacy, while the SVOD market is reaching its tipping point for what consumers are willing to pay on a monthly basis.

What’s not in doubt however, is that we’ll continue to see massive battles for market share among the big guns, newer and nicher entrants regularly joining the party, along with further significant shifts in user behavior. You as a content creator are no longer locked out of this sphere, as advancements in technology create accessibility, the growing audience creates the business opportunity, and there are numerous methods of monetisation available.

This still feels very much like the beginning of the OTT era, and right now, the trajectory is very much upwards.

Alanna, hailing all the way from Dallas, Texas, two-stepped her way across the pond to join Blue Billywig in 2019. With over 10 years experience in software companies in both Texas and California, Alanna is a key member of the Media Solutions team, supporting our clients worldwide as Customer Success Manager. In her spare time, true to her roots, she is a self appointed BBQ queen, smoking premium meats while listening to Alanis Morissette on repeat!

By Eva HekmanApril 28, 2017online video, online video event, smartphone, video advertising, video marketing
Watching a series or film during a long train ride. Sharing a funny video with your colleagues over lunch. We are watching more and more video content every day.

By Blue BillywigSeptember 12, 2017design, online video, outstream video, video advertising, video engagement, video player
Videos appear in many shapes and sizes. A video player within an app has different measurements to a video player on a website.

How to increase your video advertising revenue

How to increase your video advertising revenue

Empowering premium publishers since 2006. Contact us today to join and get started.